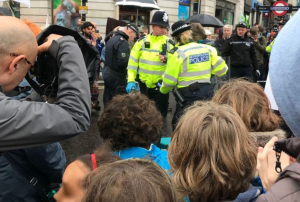 Why are they sitting on the floor?
Why are their arms locked together?
What are they doing?
That policeman looks like he’s one of us. He’s just standing there watching.
What are those boxes for?
Why is he serving food?
Why is she dragging her feet? Does that hurt?
Why does that helicopter have two propellers?

I stand with 3 Free We Grow children in a circular crowd, surrounding a group of protesters sitting on the street in Trafalgar Square. They are ‘Earth Protectors’ and they are singing a slow and peaceful hymn for the earth as they block traffic. A young woman at the front, singing solemnly, makes eye contact with us, a smile in her eyes.  Yellow vested police officers, with hands crossed in front of them, look on calmly.

We form our own group and sing a song for the animals which we’ve modified from The Cup Song which some of the children have been practicing percussion for this term. The children delight as other protesters join our circle, singing for the permafrost and the whales.

The trip to join the Extinction Rebellion protests last term was part of a wider emerging response which our community is working out in reaction to the palpable sense of an impending climate and ecological crisis. These terms and ideas are big and children are hearing about them and feeling the tension around them as they go about their day to day. As a community we are working together to hold space for children to express and explore these themes in ways which feel safe, calm and reassuring.

A few weeks ago, the children arrived at Dacres Wood with rising anger towards Boris Johnson. Boris was whispered across the forest like the chirrup of a bird who’d suddenly spotted danger, warning its mates. In the flurry of an impending stampede, all the children picked up on the message and gathered in the meadow exchanging fluttered murmurs of Boris. United in their defense against the big bad wolf they rallied in a chant to bring him down, bumping into each other like ants checking each others’ whereabouts. The commotion subsided, in the reassurance that the big bad wolf was not about to attack, and in the next few days, they put their energies into practical expressions of their intent. Some of them wrote slogans and drew posters mimicking crass banners they’d seen on the streets and others built model Borisses out of Lego which they controlled with exaltation in their lego palaces.
Holding space for this play was uncomfortable.  Back home I spoke to my ex-housemate about this. Bryan grew up in 1980s Paisley on the outskirts of Glasgow. In the school playground, children played miners, police officers and scabs, re-enacting the scenes they saw on the telly. Children’s play is a sobering reflection of our society.

But the experience of going to XR was different from the play that took place a few weeks earlier. The protesters were singing, they were not shouting angrily. They were dancing, not smashing things. The arrestees were taken away to rounds of applause. The police officers were careful not to harm the protesters. Later when we arrived back at Dacres Wood, talking and debriefing along the way, one of the children held up an imaginary machine gun in his arms: I’m a police officer! He exclaimed. Perhaps that imagery came from movie posters or computer games. That’s interesting, I don’t remember the police officers carrying guns today, I said. Oh yeah.. He put his gun down.

Going to the XR rebellion was not everyone’s cup of tea. A few children chose to stay home and some parents expressed their discomfort with XR’s strategy. As a facilitator, it felt good to me to be able to hold space for each to act as they felt capable and driven to act. As a home educated community, the children at Dacres Wood bring in ideas, discussions and actions from their days with their families and out in the world, and this enriches our collaborative space. Apart from protest, this is shaping our engagement with our physical space on a day to day basis, and I thank our lucky stars every day that we are fortunate enough to spend our time together in the beautiful Dacres Wood Nature Reserve. Part 2 of this blog post explores this.