I was watching a Ted Talk the other week called ‘Nature is everywhere, we just have to learn to see it’, by Emma Marris, an environmental writer who writes for National Geographic. In her talk she makes the point that we have stolen ‘nature’ from our children. And by that she doesn’t mean that we’ve stolen nature itself, but that we’ve stolen the definition of nature, the word itself. She goes on to outline how when people speak about nature, they often mean natural areas which are separate or as separate as possible from human interaction. National parks, forests, scraggly coastlines. Often these places are hard to get to, and when we do get to them, we are expected to interfere as little as possible with them. We stay on the paths, we don’t pick pine cones, we don’t climb trees.  They are so protected that our engagement with them is minimised. They are also highly managed, fenced, access limited, water levels tested, alien species controlled, trees felled or planted.
On the other hand, there are places all around us where nature grows rambunctious. These are places that we sometimes overlook, they are not ‘nature’. The curb, the empty lot, the top of the garage, the edge between the wall and the yard. These are places that are not protected nor managed. They are also places where we can get close and personal with nature and where no one is going to tell us not to, because this bug or that flower is precious.
At Dacres Wood we are so extremely lucky to spend our days, all day in nature. And that is both natures. The nature of the reserve which is managed and protected, and the nature of the yard – yes the one with the rambunctious life growing between the wall and the yard.  And we are aware of both. It’s been interesting, over the last few weeks, seeing how the children interact, play, engage and have their own conversation with nature. 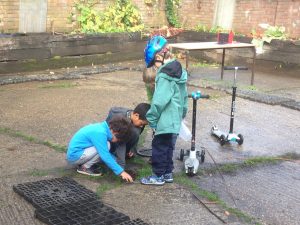 One of my favourite moments was when the kids realised that if they dig around the drain in the yard they can access the drain cover and remove it and see the water flow underground. There are several centimeters of soil, around the edge of the drain with roots of several species of grasses which have dug themselves well into the concrete. The soil is so deep that two wriggly worms had made it their job to churn it. The water at the bottom of the drain seemed so still and transparent, and then 10 seconds later, it’s murky as little hands drop pebbles in and wellies disturb the sediment at the bottom. Let it sit, and it goes still again. Run the tap in the yard, murky.
In the forest it’s different. Something to do with scale maybe. Sticks, branches, logs, trees, trees you can walk into! bramble. You can run in the forest, get on the ground, crawl, scrape, feel it all around you.  Sometimes the scale zooms in and out. Acorns, berries, haws, leaves, moss. Smell it.
There is one area is the reserve however, where I feel like perhaps we have instilled a little bit of sense of nature as separate and needing protection and management, and that is the pond. As an amphibian nature reserve, the focus of which is the pond, we have been aware of the importance of not disturbing the ecosystem. We’ve actually asked the kids to avoid walking on the banks, to be careful not to trod on the reeds or pick too many when weaving their sails, and play around the water needs to be supervised. This has meant that until now, the wild, nature play mainly takes place in the forest. Somehow the kids haven’t spent that long exploring the pond. 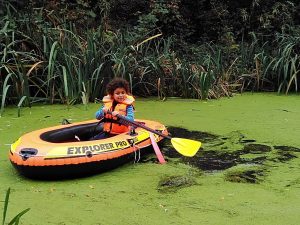 This all came to a head the last week of last term when one of the children brought in his dingy to ride on the pond. Ooh, wait, are we allowed to? I wasn’t frankly expecting this request to come up so soon. What about the wildlife around the pond? We decided to call the manager of the nature reserve. There are no nesting birds at this time of year, we should be fine doing it so long as it doesn’t become a regular thing. The council is not sanctioning it. We’d have to conduct our own risk assessment.
Risk assessment done, measures in place and the dingy and two rambunctious children were on board. Suddenly the pond it’s not just a pond, it’s the splashing water, the patterns the oars make as they find a path through the duck weed, it’s the water’s edge of the banks, the reeds are not as big here; it’s the sticks that gather in the corners, it’s the stump of an old tree with scraggly branches that you can touch and feel and work out how to climb onto, it’s the buoyancy and the view of the forest, and the other 5 children and 2 facilitators leaning on the edge of the dipping platform, cheering you on.

Emma Marris wrote a book related to her Ted Talk, called Rambunctious Garden: Saving nature in a post-wild world. I haven’t read the book yet, but I had to look up ‘rambunctious’ in the dictionary: Uncontrollably exuberant, boisterous, high spirited, bubbly. Rambunctious nature, rambunctious children.