One vivid image strikes me most 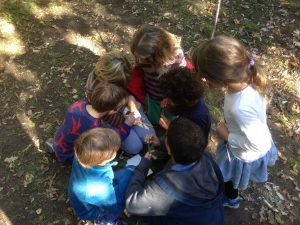 when I think back over our first few weeks at Dacres Wood: the troop of children joyfully bouncing and zipping around the woods, along the bridge, to the courtyard like a deer herd, bellowing and screeching as they go.

The children have spent their first few weeks together navigating their new connections and friendships, and learning about how it is to be together. Their games have involved cooperating and helping one another, allowing for different and complementing characters to emerge. The older children seem to be learning to lead the play, to adapt and calibrate rules, to come up with new ideas when the game gets dull, whilst others seem to be learning to self-regulate and notice when their play affects their peers. All relishing in the sense of camaraderie and warm feeling of individuals that are part of the group, merrily jumping and bounding to keep up with the rest.

Who knew there were so many variations of the ‘stuck-in-the-mud’ game, the age old favourite that requires being chased and working together to escape. While Rowan and I try not to interfere too much with the children’s play, they seek us out to help go after, chase and catch prisoners. We watch as they huddle and scheme, creeping quietly through the wood, hanging their jumpers off trees to trick us into an ambush, and finally out-running us to save their companions. This is teamworking, problem-solving and character development in action, off the textbook pages and into the world.

Last week was a little different however. It signalled a change from previous weeks as some of the children became bold enough to slip out of the flock for a while. This takes some self-assurance, knowing that the others are out playing together, resisting the tinge of worry about missing out on the group’s games. But some venture indoors and set out their quiet activity at the table – kite-making, drawing – inspecting mine and Rowan’s activities for a while, taking a peek, having a go, asking ‘what’s that?’. Curiously and independently investigating what is going on around them, before dipping back into the galloping herd, that is so dear (oh dear) to us.