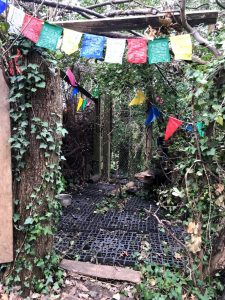 It’s 8:30pm on a Monday evening and my WhatsApp pings. I receive this message from Sally:

For the treasure hunt: I was thinking of changing the ending of this Aesops fable so the grasshopper is grateful for a drink of wine and then leaves the owl to go to sleep.

There’s a link to the fable in question. I open it and read a story. It’s about a grumpy old owl who wants to sleep. He is bothered by a singing grasshopper who won’t leave him alone. So he flatters the grasshopper’s singing, inviting him into his den and proceeds to pounce on him and eat him. The moral is that one must not trust flattery.

I watched myself as my initial instinct was – wait – but we can’t change fables can we?

Let’s backtrack a litte. The treasure hunt was for a child, whose birthday it was. We have a tradition of having treasure hunts for children’s birthdays if they want one. This child is interested in owls and requested an owl themed treasure hunt. Sally has a lovely way of weaving stories into treasure hunts. The event took place at a time when as facilitators we were actively trying to understanding the dynamics within the group, as well as understanding how as a community we can respect each other’s needs while being able to meet our own needs. See my last blog post for a reflection on this. We were also (and still are!) working out how to support the development of a more considerate and kind culture.

I messaged back – yeah I like that ending better!

I’m sharing this story as a tribute to my co-facilitator whom I’ve been incredibly grateful to work with. Sally joined Free We Grow right from the start and from the beginning has employed a thoughtfulness, care and devotion which can only come from a deep belief in what she’s doing and love for the people with whom she’s working. 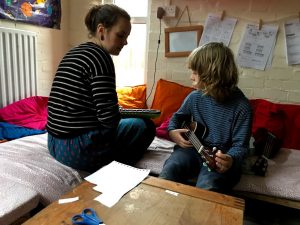 I’ve experienced her kindness and patience, her impeccable organisational skills, her passion to learn new skills and share them with others, her creativity in finding solutions to complex questions and to speaking her mind once she’s had the time to really think things through. I’m grateful for having had the opportunity in the last two years to work, get to know and become friends with someone so brave as to question and reimagine the foundations of our relationships and our world, even if it means rewriting lore from millenia past.

As I wrote this article, I did some further research and found that what we take for granted as wise old wisdom is just one way of seeing the world which has been propagated and promoted, one put together 2600 years ago by a Greek political satirist. Even the Victorians found some of the stories so crude that they had to water them down. I don’t know why I hesitated when Sally first told me what she planned to do. That’s a deep question around my own unlearning process. But I certainly don’t want to hesitate in the quest for a kinder and more just world – and I’d happily let Sally write that world’s fables any day.

Sally will be leaving Free We Grow in the summer and we’ll miss her dearly and wish her the very best for her next adventure!

Note from Sally
I’m not sure if I would change the ending of a fable again. It feels a lot like censorship, and I feel that children should have access to all the kinds of stories, no matter whether the message is ‘good’ or ‘bad’. If the themes are problematic or uncomfortable this can be a great opportunity to unpick the issue and develop a critical mind. I am flattered by Rowan’s kind words in this blog, and also trust that, unlike the owl, she’s not going to try to eat me… so that’s a plus.